The National Weather Service reported only .1 inches of rain fell at Midland International Airport between September 2010 to August 2011. Such conditions prompted the Colorado River Municipal Water District, Odessa’s water supplier, to limit water deliveries by 10 percent on two occasions. In reaction to CRMWD’s limitations, Odessa enacted water restrictions requiring that businesses and residents use outdoor water once a week for only two hours.

Dry West Texas conditions also made the landscape vulnerable to wildfires. The Texas Forest Service reported that wildfires consumed more than 3.9 million acres — 47.6 percent of acreage burned in the U.S. — throughout the state between Nov. 15, 2010 and Nov. 15, 2011. The Rock House Fire burned in Fort Davis from April 9, 2011 to May 12, 2011 and was the largest fire in Texas history, having burned nearly 315,000 acres. 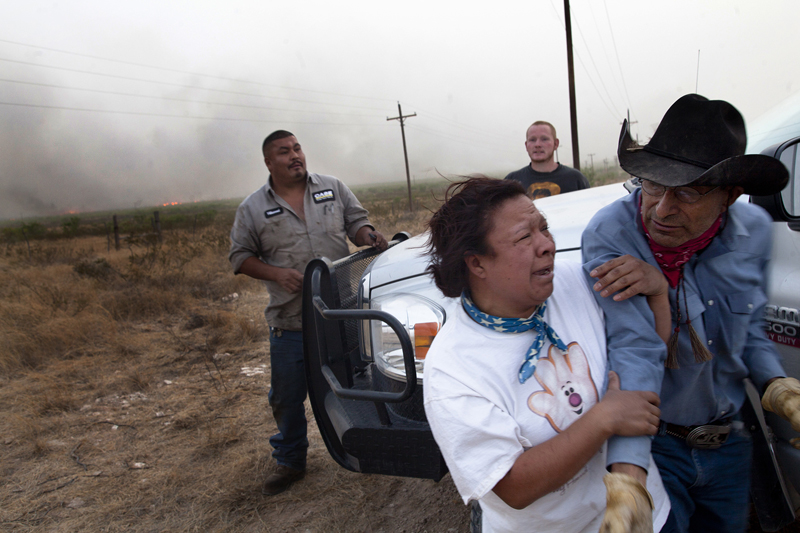 Sandra Villarreal grabs her father-in-law Francisco Villa who wants to drive into the wildfire to rescue his cattle Tuesday, April 26, 2011, off of W. Apple Avenue in Pleasant Farms, Texas. 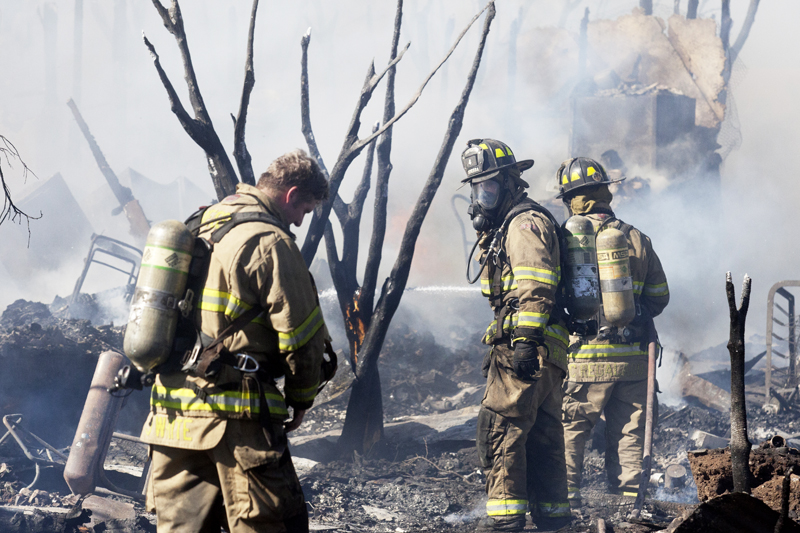 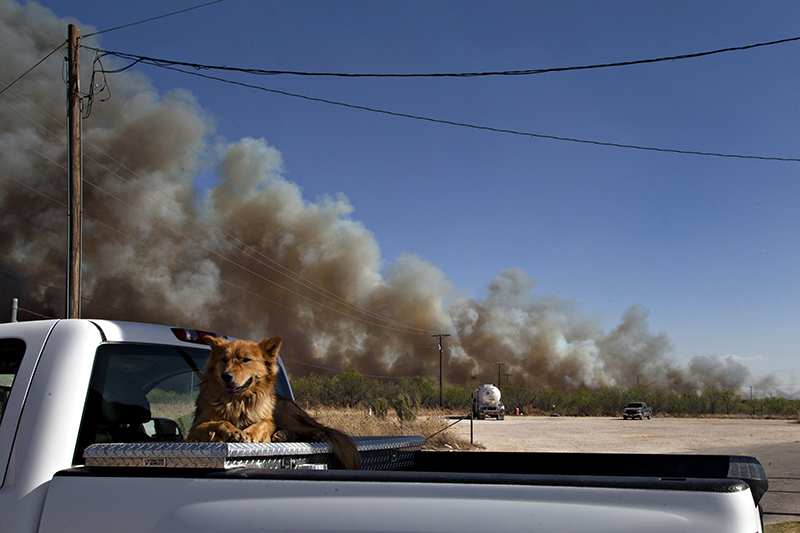 A dog sits in a Gulf Coast Waste Disposal Authority vehicle blocking of a road running through their property due to a grass fire that started Sunday, April 3, 2011. Odessa Fire Department, Midland Fire Department, Texas Forest Service and West Odessa Volunteers responded to the fire. Texas Forest Service said 1500 acres were burned in the fire that started around 3:30 p.m. and wasn't contained until after midnight. 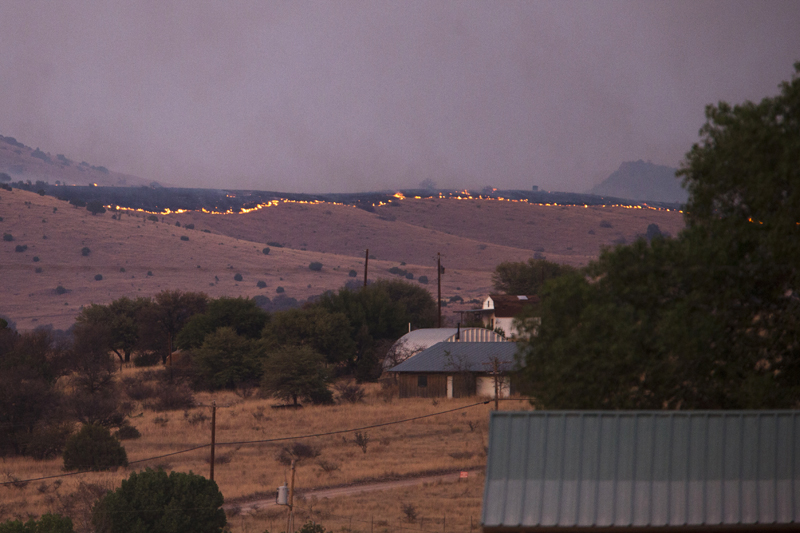 Wild fire burns on Monday, April 11, 2011, north of Fort Davis and west of SH 17. The fire burned more than 292,739 acres making it the largest wild fire in recorded Texas history. 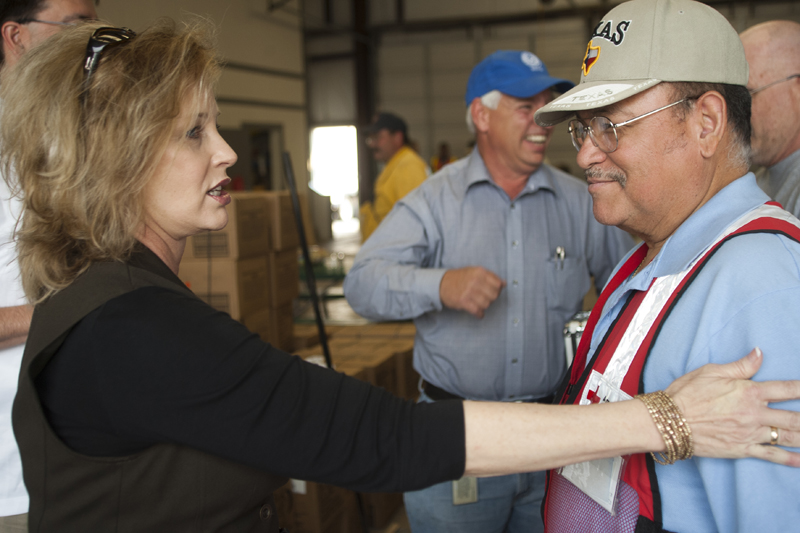 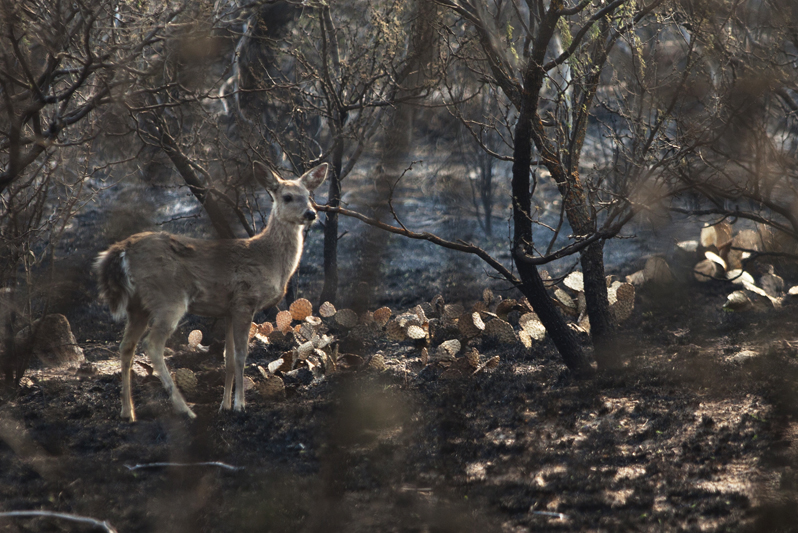 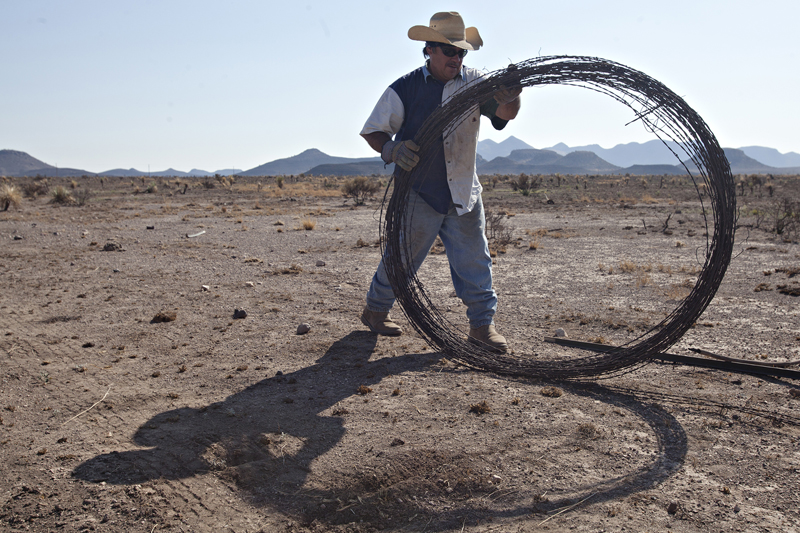 Albaro Burciaga rolls up barbed wire while replacing six miles of fencing July 8, 2011, on both sides of Interstate 17 between Marfa and Fort Davis on the Crown X Ranch No. 2. The Rock House fire, which burned over 292,739 acres, destroyed the fence at the Crown X Ranch No. 2 as well as several other ranches in the area. 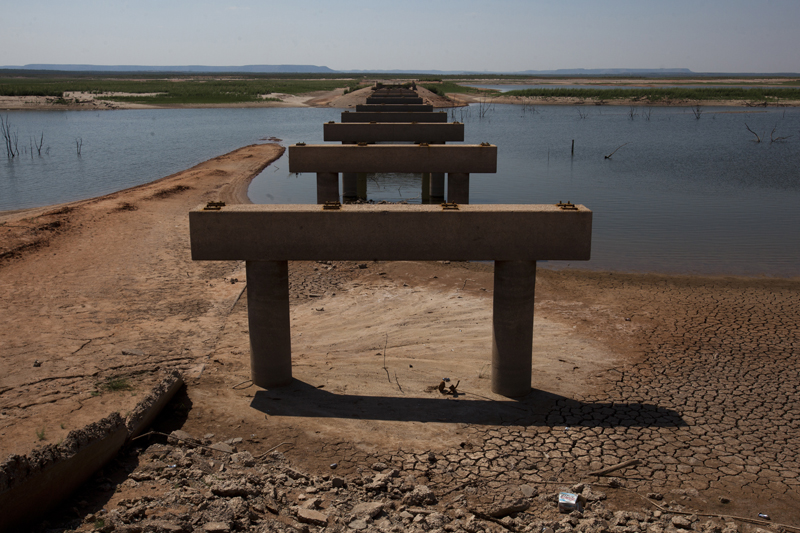 Remnants of a bridge that crossed the Colorado river before Lake EV Spence was created on Thursday, Sept. 1, 2011. According to the Colorado Water District at full capacity the bridge is submerged over 100 feet. 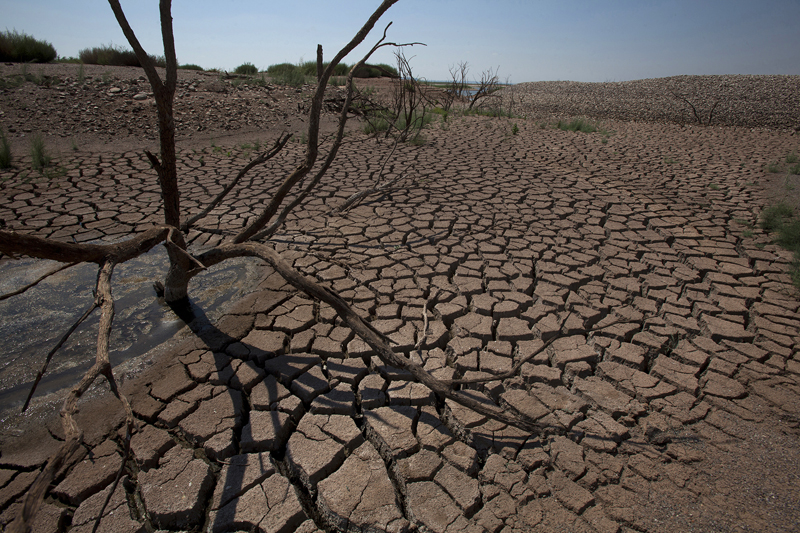 A dried area of the bottom of Lake EV Spence outside of Robert Lee, Texas Thursday, Sept. 1, 2011. The owner of Wildcat RV Park and Paint Creek Mobile Homes Park Jack Smith said due to the current water levels of Lake EV Spence he has lost more than $10,000 over the summer due to slow business. According to The Colorado Municipal Water District Lake EV Spence was at .5 percent campacity on Aug. 29th. 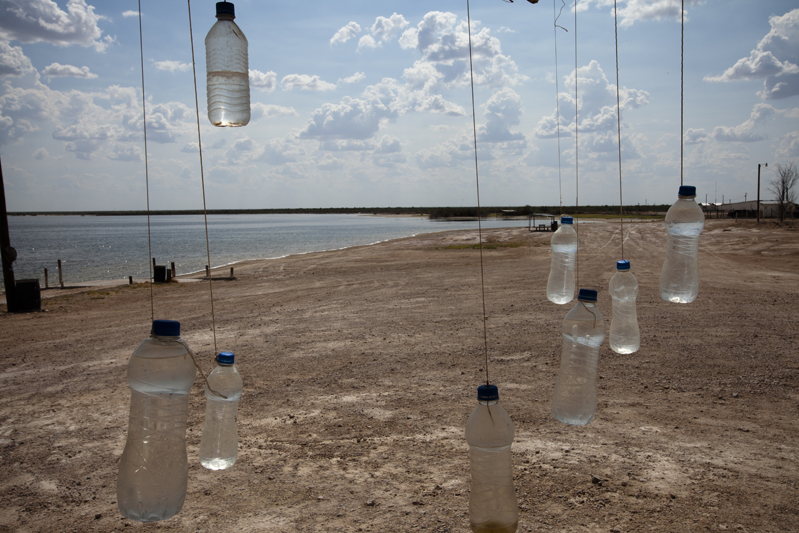 Water bottles hang on a picnic area Thursday, April 25, 2011 at Imperial Reservoir south of Grandfalls. The reservoir serves the farming community for irrigation but is also a place for people to picnic, swim and boat at. "Business has just slowed down to nothing right now because the water is so low," Butler said. Butler said the reservoir is to low to take mosts boats in currently. 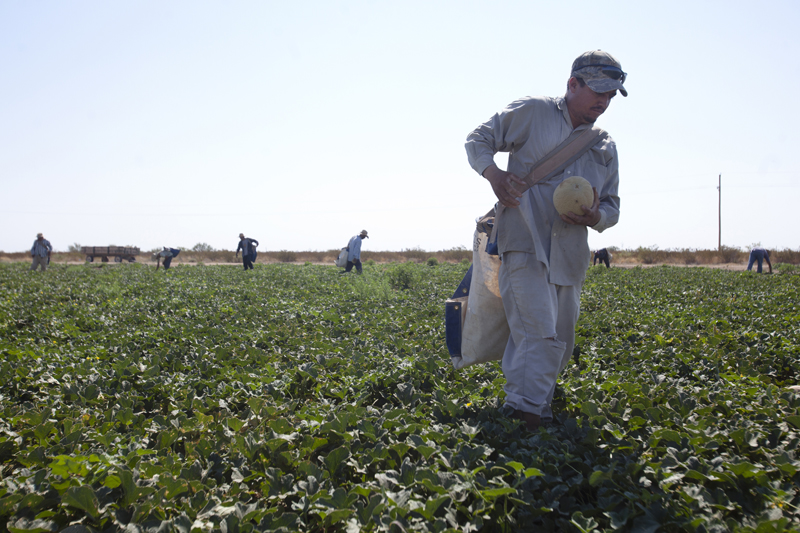 Farm hand Gerardo Mandujano, center, picks cantaloupe in one of the Mandujano Brothers Farm fields on Thursday, July 7, 2011 off of Farm to Market 1776 outside of Coyanosa. Geralrdo Mandujano is one of approximately 60 workers that help pick, clean and package cantaloupe, watermelon and onions. The melons are watered using drip irrigation from below the ground, which co-owner Beto Mandujano said allows the soil to remain dry on the surface. “Cantaloupes, you’ve got to pick ‘em every day, and when it rains it can throw you off,” Beto said. 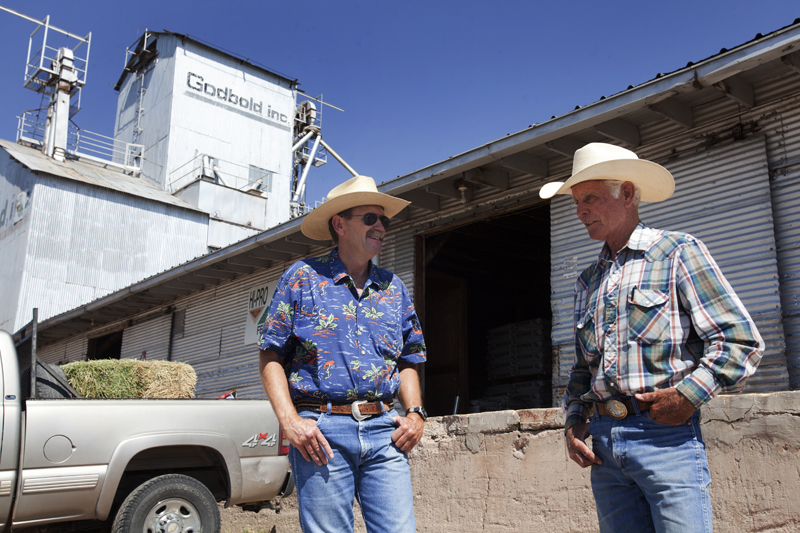 Tom Wood, left, and Jermy Baker have a conversation after picking up feed for their cattle Friday, July 8, 2011 in Marfa for their ranches. Wood said that if it did not rain he would have to liquidate his cattle. 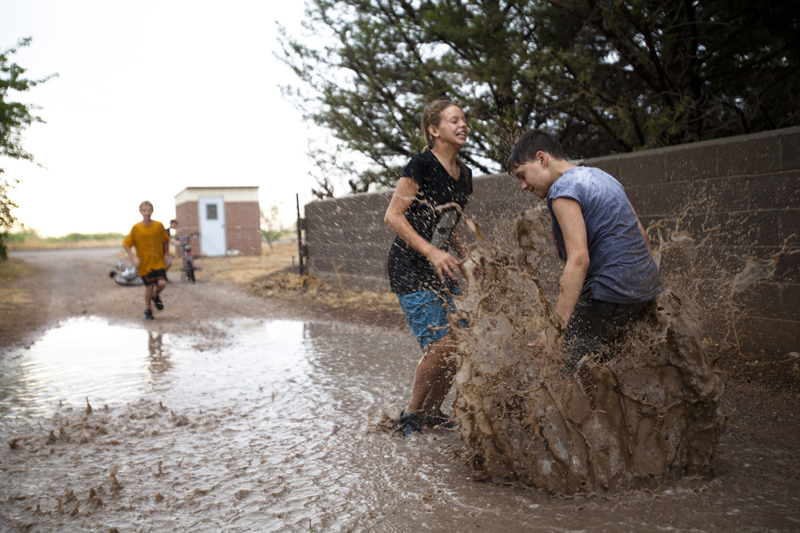 Danyale Cox, 12, and Michael Wheeler splash each other in a puddle on Tuesday, July 12, 2011, after a thunderstorm near West County Road 122 in Redwood. According to the National Weather Service in Midland, Texas, it had been over 9 months since the previous rain in the area.